It’s a new year and hopefully a better one when it comes to the U.S. economy and job market. Barring any major economic upsets, we here at Peoplelink are optimistic about the future, especially when it comes to staffing. Here are 6 reasons why:

Monster recently predicted that temporary hiring is likely to be strong well into 2012, which bodes well for staffing agencies like Peoplelink. This also indicates that even though employers are cautious about hiring full-time, they are experiencing an increase in demand – and need more workers as a result.

Similarly, the American Staffing Association reported that the staffing index has been slowly increasing since February 2011, and is now where it was at the end of last year. The staffing index is a measure of temporary and contract employment trends.

According to CareerBuilder, one in four employers plans to add full-time staff in 2012; while that’s approximately the same number as in 2011, at least it’s holding steady, not decreasing.

Consumer confidence in December surged and was at its highest level since April. The holiday spirit may account for some of the rise, but there’s also evidence that employment prospects are brightening and that Americans are gaining some faith in the economy.

According to the U.S. Labor Department, employers took on 4.15 million workers in November 2011, up 107,000 from the prior month. In addition, the number of jobs filled in the three preceding months was the highest since the period from March to May 2010.

Since June 2010, the number of new jobs that have been created each month has been over the 100K mark. While this is slow, at least it’s still growth and a significant improvement over 2010, when six of the 12 months of the year had job cuts.

Obviously we’re not out of the woods yet when it comes to our economy. But there are some signs of life and reasons to believe the worst is hopefully over.

And if you’re a job candidate looking for a new job, or a company interested in temporary workers or full-time staff, Peoplelink can help. Since 1987, our staffing agency has consistently been able to provide a link to the top talent and the top jobs throughout the country.

Learn more now about how we can help you. 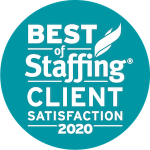